Existing home sales were approaching the end of the year on a promising note. Monthly data from the National Association of Realtors had shown sales slipping in May, June, July.... Then in October there was an unexpected rebound, not a big one, an increase of 1.4% from September, but still a welcome relief. The November report bestowed another 1.9% gain; sales seemed to be getting back on a roll. Of course, by then, year-over-year sales were down 7.0%, the lowest in 7-1/2 years.

Analysts were expecting a slight decline in December. Those sales would have reflected houses put under agreement primarily in late October and November when interest rates had peaked, but the report actual blindsided everyone--a 6.4% decline. This further widened the year-over-year deficit, of course. December finished up 10.3% behind the same month last year; 4.99 million annualized sales compared to 5.56 million.

NAR Chief Economist Lawrence Yun told CNBC's "Nightly Business Report" that such a huge change is usually due to some big news "like an expiring tax credit or a change in consumer protection laws." This one he pinned on buyers' price concerns as well as the November rate peak. Elsewhere he also faulted the continuing lack of inventory.

Joel Kan, Associate Vice President of the Mortgage Bankers Association, had a slightly more upbeat outlook. He acknowledged the current affordability challenges but added "We do expect this to dissipate slowly, as there have been more signs of moderating home-price growth and accelerating wage growth, which should help bridge the affordability gap."

While we have seen appreciation moderating in most recent home price reports, those from the Federal Housing Finance Agency's (FHFA's) have been remarkably stable. With the exception of September, month-over-month national price gains have held steady at 0.4% since May. That held true for this week's report for November as well. The year-over-year increase was 5.8%, up 0.1 point from October.

Regional indices are a different matter. Four of the nine census divisions posted monthly increases in the 1.0% vicinity but three were in negative territory including the Pacific division with the largest decline, 0.8%. Further, the annual price increase in November was 4.9%, only slightly more than half of the annual gain in November 2017 of 8.9%.

Finally, giving new meaning to the word "stability," the 30-year fixed-rate remains at 4.45% for the third straight week. 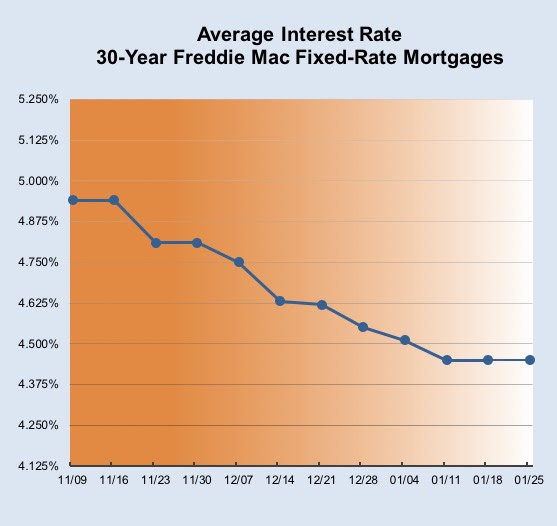