BUBBLE WATCH: COULD THE HOUSING MARKETS IN THESE TOP CITIES BE GETTING TOO HOT?

Home prices are skyrocketing faster than inflation. Bidding wars are breaking out. Shacks in the nation’s most scorching real estate markets are selling for over a million bucks. Things seem to be heading up, up, up. Sound familiar?

Déjà vu can be a spooky thing. Some folks these days are beginning to wonder whether the U.S. is seeing another housing bubble, like the one we suffered through beginning in 2007—and a reprise of the bloody financial carnage that followed when it burst.

Well, let’s get this out of the way right now, Chicken Littles of America: The sky isn’t falling, and the real estate market isn’t crashing. There are indeed a few warning clouds on the horizon (more on that below), but things in the world of residential housing are generally safe and steady and continuing to grow. Got that?

Those sky-high prices and ultracompetitive bids we at realtor.com® report on daily are mostly the result of a housing shortage rather than ominous signs of another real estate meltdown. The factors that led to the historic bust—easy-peasy credit for all, rampant flipping, frantic overbuilding—simply aren’t happening today.

In fact, the opposite is true these days.

“Only the most qualified buyers are able to get financing” for mortgages, says our chief economist, Jonathan Smoke. “Flipping is back to normal. And we’re building about half as many homes as we need.”

As it turns out, not a single big metropolis in the good ol’ USA—that’s right, not even San Francisco or New York—appears to be “bubblicious,” says Smoke, who carried out an analysis of the 50 largest metropolitan markets in the country. During the bubble, home values were dramatically inflated, making the high prices unsustainable.

There are, however, a few super-duper expensive cities (San Jose, we’re looking at you) where the real estate market is showing signs of overheating, according to Smoke’s analysis. That means the high prices can’t be sustained—because as we all learned from high school (grade school?) science class, what heats up must eventually cool down.

In those smoking-hot markets, Smoke expects the relentless rate of price increases to eventually slow, or even dip, when prices hit a point that buyers can no longer afford.

“There are places that have risks,” Smoke says. “But even those places do not resemble what they looked like in their actual bubble years.” 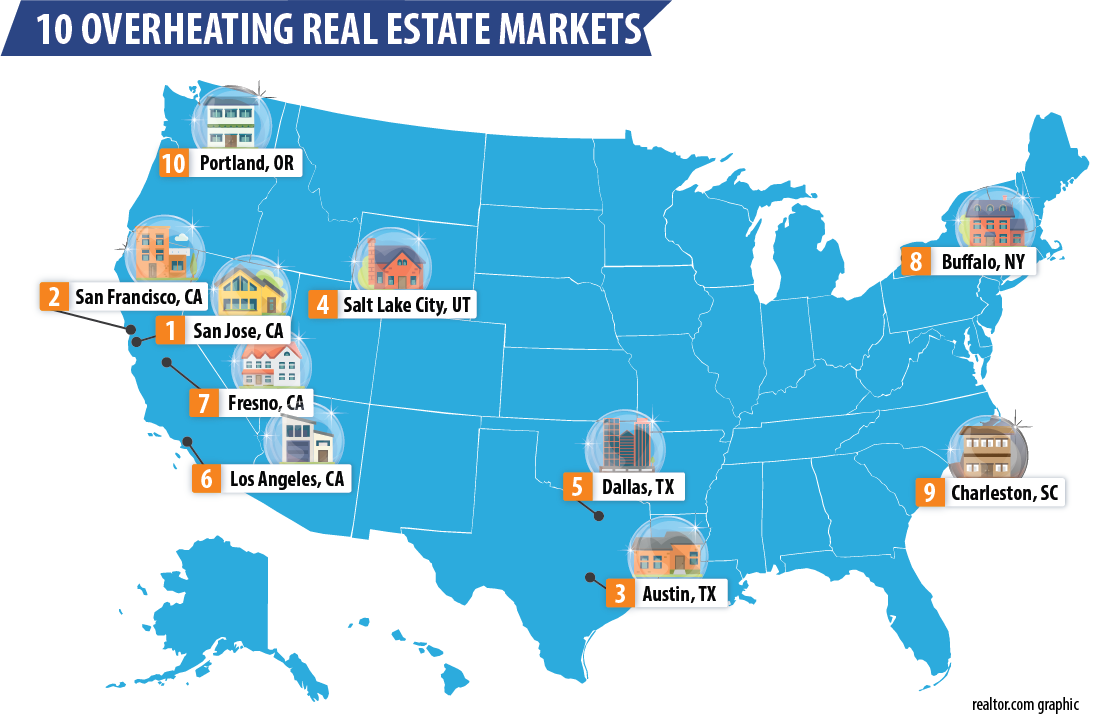 To reach this conclusion, Smoke and the realtor.com data team analyzed 50 major housing markets from 2001 through 2015, using 2001 as a baseline year.

(Critics will be quick to point out that the country was just coming out of the dot-com bust in 2001, and then there were the terrorist attacks of 9/11. But despite those factors, housing experts consider 2001 to be the most normal, recent year before the bust, when homes were considered fairly valued. It is also the earliest year for which all the data were available.)

Smoke and his team then created an index of the six factors that create a housing bubble to assess whether any of these 50 markets were overheating. Here are the criteria:

Home flipping: Are more homes being bought and sold for a profit within a year?

Mortgages: Is there a larger share of buyers getting mortgages, which they potentially could default on? Or are they paying in cash?

Home prices compared with wages: Are homes more expensive now for locals earning the local median income than they were in the past?

Home prices compared with rent prices: How do the costs of buying today compare with the costs of renting historically?

Construction: Are too many homes being built to meet the needs of the area’s population? If so, that could spell trouble.

We’ll say it again: None of the cities below is in a bubble. However, the top six cities—San Jose and San Francisco, CA; Austin, TX; Salt Lake City; Dallas; and Los Angeles—do show signs of overheating as prices continue to zoom up. The next four on the list—Fresno, CA; Buffalo, NY; Charleston, SC; and Portland, OR—show some elevated risk, but they seem to still have plenty of room to grow.