Lots of housing news this week and it touched all of the bases; construction, sales, and home prices. It also ranged from pretty good to very bad with a bit of "we aren't quite sure."

Pending home sales were the good news. They have been, to put it kindly, sluggish for months, with negative reports from October through December. This week the National Association of Realtors (NAR) announced an abrupt and rather surprising turnaround. Its Pending Home Sales Index (PHSI) surged 4.6% in January, more than doubling the highest predictions of Econoday's analysts. It wasn't enough however to overcome the Index's annual deficit. The PHSI is down 2.3% from January 2018 marking the 13th month of year over year losses. Pending sales were up in all four regions compared to December, although three of them are still running substantially behind year earlier levels.

The residential construction report released this week was December data, delayed for five weeks because of the government shutdown. It didn't improve with age. Both housing starts and unit completions were down, while permits eked out a slender 0.3% increase from November and 0.5% year-over-year. Completions were down 2.7% and 8.4% from the two earlier periods.

But the real concern was housing starts. They, along with the other two indicators, had a strong November, one of the few good months last year. But not only did a 11.2% nosedive in December wipe out the previous 3.2% gain, but November's reported annual pace was downgraded by 32,000 units. The single-family sector was especially weak for all three measures.

Depends on Who You Ask

Whether the continued slowdown in appreciation is good or bad news depends on whether you hope to buy or sell and increasingly on where you want to do it. In either case, it happened again in December. The S&P Case-Shiller National Index was up 0.3% on a seasonally adjusted basis from November and 4.7% annually. The annual gain in November was 5.1%. There was an identical 0.4-point deflation in both the 10- and 20-City Composites to 4.2% and 4.6%, respectively.

The annual increase in the Federal Housing Finance Agency House Price Index, based on Fannie Mae and Freddie Mac home purchase mortgages slipped 0.1% from November to December, to 5.6%.

The Case-Shiller report noted the regional changes in appreciation. Atlanta just became the third fastest growing while Seattle and Portland (Oregon), which led all metro areas for nearly two years, are now in 11th and 16th place. 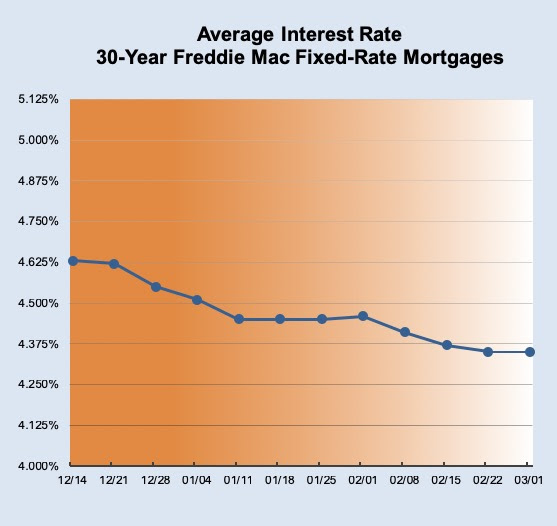