Existing home sales slipped again, but the phrase "its all relative" jumps to mind. So do the words "at least it's not as bad as last month." Sales were down by 1.2% from December. Disappointing, but hardly the 6.4% dive they took then.

Lawrence Yun, chief economist for The National Association of Realtors (NAR), said the annual rate of 4.94 million sales in January was the poorest showing since November 2015, but that they are likely to have reached a cyclical low. "Moderating home prices combined with gains in household income will boost housing affordability, bringing more buyers to the market in the coming months," he said.

Inventories increased from 1.53 million in December and 1.52 million a year earlier, to 1.59 million. Yun noted inventories have now increased year-over-year for six straight months. He also pointed out that the median annual home price growth of 2.8% in January was the slowest rise since February 2012.

Sales fell in every region but the Northeast. In the West they dipped 2.9% to an annual rate of 1.00 million and are now 13.8% below a year ago.

If 2019 turns out to be a good year for home sales, construction guru John McManus, editor of Builder online magazine, says he will have two explanations; 1) the long pent-up demand will begin to ease as Millennials move into the marketplace, and 2) homebuilders, developers, architects, and investors will have begun to crack the code for selling houses to them.

With average home prices approaching $400,000, he says the nation "has been telling young adults--in no uncertain terms--'we've got nothing for you'."

For this and other reasons, about 15% of Millennials are still living with their parents. Two-thirds of them have bachelor's degrees. They have been acting like smart consumers who have time on their side, McManus says. But given their age, not to mention the ticking biological clock, they may have run that course. Today they have improving job opportunities, growing flex-time and remote work options that expand their commuting range, and in some cases the "Bank of Mom & Dad" to help out with downpayments.

At the same time, he continues, builders and the others mentioned above "have been working on designs, product, density, operational processes, selling and data systems to make the present day's nearest facsimile to starter homes, in starter home neighborhoods, for people who want and need them."

Adding to what McManus said, and also helping the cause, interest rates dipped for the third straight week. The average 30-year fixed rate was 4.35%. 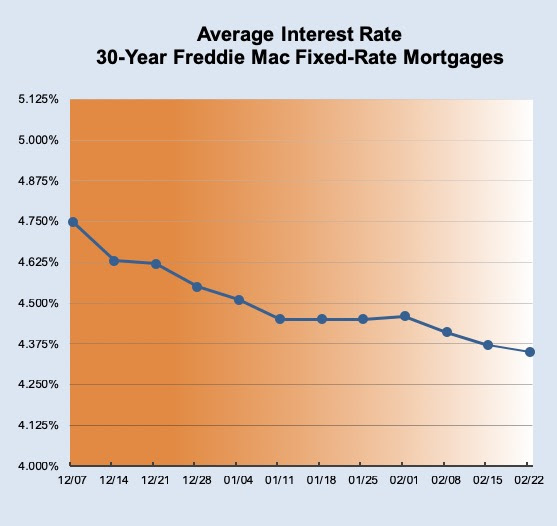