After months of divisive rhetoric about Britain's exit from the European Union, voters took to the polls and said "no" to staying with the 28-country economic and political partnership.

Investors had been playing it safe for weeks, moving their dollars into less risky Bond markets as speculation over the potential economic fallout amped up. Why is this important? Home loan rates are tied to a type of Bond called Mortgage Backed Securities. When Bond prices improve, home loan rates tend to improve as well, like they have in recent weeks. The reverse is also true. Markets around the world will likely be volatile for some time as they digest this news, and Bonds and home loan rates could continue to benefit from the uncertainty .

May home sales were a mixed bag. Existing Home Sales remained solid while New Home Sales suffered quite the setback.

On the other hand, May New Home Sales fell from an eight-month high due to weakness in the South, Northeast and West, the Commerce Department reported. New Home Sales fell 6 percent from April to an annual rate of 551,000 units, below the 560,000 expected. April's figure was revised lower to 586,000 from the 619,000 originally reported, but was still the highest amount since February 2008. 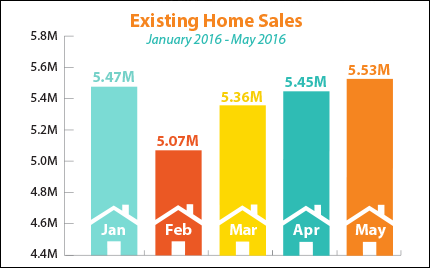