New Home Sales soared in July to highs not seen in nine years. Existing Home Sales experienced the opposite, plagued by low inventory and higher prices.

The sale of new homes is making up for an unexpected slip in July Existing Home Sales. The National Association of REALTORS® reported that sales of previously owned homes declined in July from June due to low inventories and higher prices. July Existing Home Sales fell 3.2 percent from June to an annual rate of 5.39 million units, below the 554,000 expected and down 1.6 percent from a year ago. Inventories are now at a 4.7 month supply, which is nearly 6 percent below last year. The median existing home price was up 5.3 percent from July 2015.

In terms of overall economic growth, real Gross Domestic Product (GDP) increased at an annual rate of 1.1 percent in the second quarter of 2016, in line with expectations, according to the "second" estimate released by the Bureau of Economic Analysis. GDP represents the total dollar value of all goods and services produced over a specific time period. In the first quarter, real GDP increased 0.8 percent. While consumer spending drove the increase, the buying power was offset by companies unloading excess inventory.

If you or anyone you know is in the market to invest in a new or existing home right now, home loan rates are quite attractive, hovering in historically low territory. 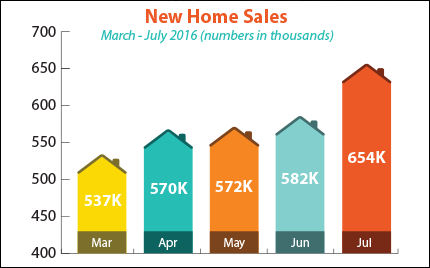