LAKE TAHOE FILLED TO THE BRIM

U.S. Water Master Chad Blanchard said his office has been spilling water from Lake Tahoe since Feb. 22 in an effort to prevent the lake's level from rising too high. It's the first time since 2006 that excess water has been spilled from the lake. 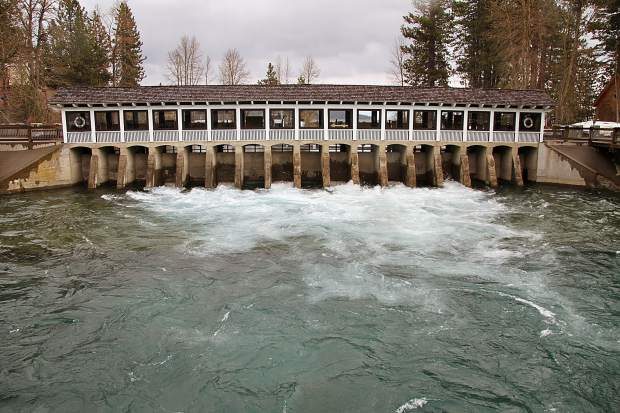 "We're already over 200 percent of the average precipitation for Tahoe City for the month of April, with a little bit more to come at least," he said. "So the big year is not letting up."

Blanchard's job is to oversee the distribution of water from Lake Tahoe. Blanchard, who is based in Reno, said water is currently being released at a rate of about 1,200 cubic feet per second (cfs).

“This is the biggest year in history as far as precipitation and snow, and we don’t know what’s going to happen, whether it’ll be one and done or we’ll hang for awhile at the top.”Chad Blanchard-U.S. Water Master

"It hasn't happened in quite a while because of the drought, but it's not that uncommon to have this much released from Lake Tahoe," he said.

The current rate that water is being released from the lake, 1200 cfs, pales in comparison to the amount of water flowing into it, or the "inflow."

But even though it's been years since the lake last filled, Blanchard said that the 1920s began a period where the lake didn't fill for 20 years. Following that period, the lake remained fairly full for the next 20 years.

"Its very cyclical," Blanchard said. "Typically, when the dry periods ends the lake fills back up rather quickly."

Blanchard said the lake nearly filled in 2011. He calls years like 2006 and 2011 "one and done years," since the lake level rose but the following years were relatively dry. That's unusual looking back at the 117-year record, since most of the time when the lake fills it remains full over the following years.

"This is the biggest year in history as far as precipitation and snow, and we don't know what's going to happen, whether it'll be one and done or we'll hang for awhile at the top," he said.

But Blanchard also pointed out that knowledge of the weather and Lake Tahoe is very limited, since records go back 117 years compared with the 4.5 billion years the Earth has existed. Lake Tahoe, itself, has existed for roughly two million years.

As for the rest of this season, Blanchard said there will be runoff flows from melting snow that could be higher than possibly ever seen, but it will be manageable.

"Right now, all of the snowpack should be melting significantly," he said. "The highest typical snowpack peaks in early April — we're still accumulating at most elevations."

The average snow water equivalent for the Central Sierra, according to the California Department of Water Resources, was 194 percent of normal on April 18. Locally, at the Tahoe City station, the snow water equivalent was reported 98 percent of normal on April 17, with 15.7 inches compared with the April 1 average of 16 inches.

The larger contrast shows in the higher elevations. For example, on April 17 the snow water equivalent measured at Rubicon Peak was 202 percent of normal, with 59 inches compared with the April 1 average of 29.1 inches. Mount Rose Ski Area received the greatest snowfall in the Lake Tahoe Basin this season, with a snow water equivalent of 92.6 inches measured on April 17, compared with the April 1 average of 38.5 or 240 percent above normal.

Blanchard explained that in past years when a large amount of snow has fallen — like 1983, 1995, 2006 and 2001 — snow accumulation often continues into May, rather than stopping in April.

"It's not abnormal, but it seems that it is often the pattern in these big years that the snow keeps accumulating at the high elevations well into May, and then it starts melting," he said.

That means Lake Tahoe will continue to rise, as temperatures warm and thaw the snow into water (inflow), which runs into the lake.

Typically, inflow peaks around June or July, but this year it isn't expected to happen until August because of the amount of snow accumulated and storms haven't let up yet. But when it does peak, the level will then begin to lower as the rate of evaporation increases with temperature and exposure to the sun.

"Basically, the lake will keep rising as long as the precipitation or inflow is greater than evaporation, and that's usually in June," Blanchard said. "It can be earlier in dry years, like May. In these big years it can be late July or early August before evaporation outpaces inflow."