After big gains in June, consumers didn't move the needle on Retail Sales in July. Economists were looking for a 0.4 percent rise, rather than the zero percent change reported.

Lower sales for gasoline, sporting goods, food and beverages, and building materials were a drag on the data. However, there was one bright spot: Retail Sales were up 2.3 percent from a year ago.

Also of note, the Bureau of Labor Statistics reported real hourly compensation decreased 0.4 percent in the first quarter of 2016 rather than the previously published increase of 4.2 percent. Compensation also fell another 1.4 percent in the second quarter, from April to June. These revisions followed an update to the National Income and Product Accounts released by the Bureau of Economic Analysis of the U.S. Department of Commerce on July 29, 2016 and don't bode well for the average pocketbook. Consumers may further tighten the purse strings as the reality of wages catches up to them.

Wholesale inflation remained tame in July, as the Producer Price Index (PPI) saw a 0.4 percent decline. The Core PPI, which strips out volatile food and energy readings, also fell 0.3 percent. Inflation reduces the value of fixed investments, like Mortgage Bonds. This means tame inflation tends to be good news for home loan rates, since they are tied to Mortgage Bonds.

For those looking to invest in a home right now, home loan rates are still on their side. Rates remain in historically low territory. 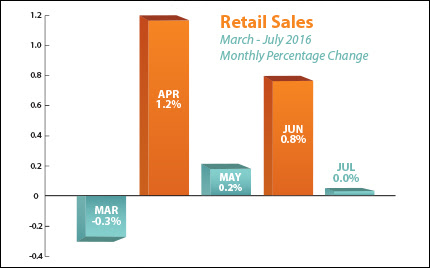