Nevada is now the nation’s fasting growing state, after the U.S. Census Bureau released their most recent data Wednesday, Dec. 19.

The Silver State is home to more than 3 million people, with over 450,000 of them living in Washoe County, according to the bureau.

In fact, Washoe County saw a growth rate of 1.8% in the last year.

According to the Northern Nevada Regional Growth Forecast, Washoe County has seen a 13.5% increase in jobs and an 8% increase in the number of occupied households.

Storey County alone saw a 218% population increase largely due to the Tesla Gigafactory, per the state demographer. 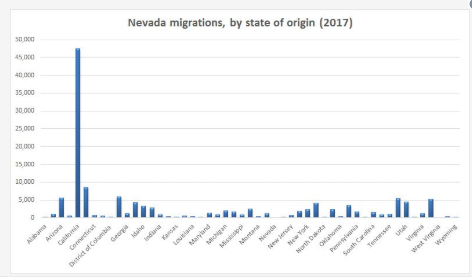 Douglas County had seen a population decline for several years before the arrival of the gigafactory.

The state demographer also notes that Washoe County is expected to see a population increase of over 16,000 people over the course of the next four years.

In the same time, Nevada is expected to grow by 200,000 over the next four years.

Experts who study these numbers say Nevada will be characterized by an increasingly diverse and more technologically advanced economy.

That will likely mean higher paying jobs, but it will create a need for a more highly trained workforce.