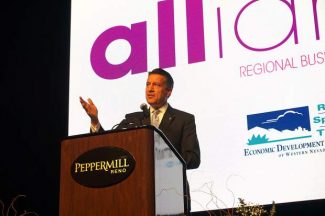 In 2011, Nevada, like many states, was getting hit hard by the unrelenting jabs of the Great Recession.

The Silver State saw 175,000 of its jobs knocked out, had a wobbly unemployment rate of 14 percent and was tagged with an $800 million bill it owed the federal government in unemployment claims.

Six years later, Nevada has rallied back and then some.

From 2011 to 2017, Nevada has created more than 250,000 jobs and dropped its unemployment rate to a mere 4 percent. Moreover, the state has not only paid off its $800 million debt to the federal government, it now has a staggering $1 billion in the bank.

Nevada Gov. Brian Sandoval relayed as much to a throng of 800 business members — who received those stats with raucous applause — during the ALLIANCE regional business expo, held Thursday, Jan. 25 at the Peppermill Resort Spa Casino in Reno. ALLIANCE is a joint effort between the Economic Development Authority of Western Nevada (EDAWN), the Reno-Sparks Chamber of Commerce and the Reno-Sparks Convention and Visitors Authority (RSCVA) to foster economic growth in Northern Nevada.

“Today, we’re No. 1 in the country in job growth,” Sandoval said in an interview with the media. “Seven years ago, we literally had to borrow money (from the federal government) in order to pay unemployment benefits. So not only did we pay that off, we have a billion dollars in the bank.

“And that really speaks to the business community — they’re the ones that pulled that increment.”

Indeed, the economic boom has been felt strongly throughout the state, especially in Northern Nevada.

A key player in the uptick is the tech industry, which has surged into the greater Reno area in the last five years. In fact, since 2012, 75 new advanced manufacturing companies have planted in the region, with Tesla making the biggest imprint — in more ways than one.

Located at the Tahoe-Reno Industrial Center in Sparks, the Tesla Gigafactory 1, which has a current footprint of more than 1.9 million square feet, is projected to employ 6,500 people in 2018. At full capacity, Tesla is projected to employ as many as 10,000 people, said EDAWN President and CEO Mike Kazmierski.

“We worked really hard to bring advanced manufacturing in over the last six years and have been very successful,” Kazmierski said. “Manufacturing in the 21st century is about technology, software, robotics … all the things that will help us grow our tech sector going forward. That’s really our future.”

Kazmierski said that dovetails with EDAWN’s focus on bringing better jobs and higher wages to the region.

“We’re really shifting much more effectively to the technology sector,” he said. “And what’s happening in California and in the Bay Area, many of those companies have said ‘enough’ in California. And we want to be one of those options for them as they look to relocate.”

There is, however, a pivotal factor tied to Northern Nevada’s ability to keep the pace: affordable housing.

“It’s the only thing that keeps me up at night,” Kazmierski said. “If someone says, what’s going to slow things down? What’s going to stop us from reaching our potential? It’s affordable housing. Because we’ve been slow to build, we caused the housing prices to get too high.”

Sandoval and his constituents are well aware. He said the state has been working hard to approve industrial bonds, which allow for the construction of more affordable housing.

“But, it’s constantly a catch-up,” Sandoval continued. “The construction industry is a little gun-shy after the recession. And so we want to make sure that they feel comfortable in making those investments. But the state’s participating, the local government’s participating, and that’s been a No. 1 priority.”

In addition to attracting more companies, Northern Nevada has seen an influx in visitors and corporate travelers, especially in the Reno-Tahoe area.

“The regional economy is doing great right now,” said Phil DeLone, president and CEO of the RSCVA. “I think here in Northern Nevada a lot of that’s fueled by the four-to-five hundred companies that have moved into the region. That’s provided us a good base of inbound corporate travelers.”

What’s more, DeLone said the region is at “well over” 3 million cash-occupied room nights, and has seen a historic $347 million in taxable room revenue — in other words, revenue that the hotels and motels collect.

“Obviously, the hospitality industry is going to go in peaks and valleys,” DeLone said. “So we’re always making sure that we keep our eye on the ball and that our resorts are well taken care of.”

Keeping you in the know,