Whether talking about home prices or the cost of goods and services, money is on everyone's mind.

New Home Sales fell 7.6 percent in August from July, the Commerce Department reported. The drop followed a stellar July and still landed well above expectations. From August 2015 through August 2016, sales rose a whopping 20.6 percent. There was also news on home prices: The S&P/Case-Shiller Home Price Index showed a 5.0 percent gain in the year ended in July, just below the 5.1 percent expected. 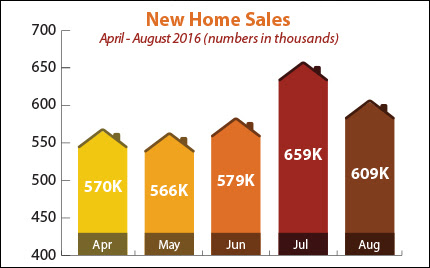 The economy as a whole continues to trudge along. Gross Domestic Product (GDP) is still running lower than what is considered healthy. The final reading on second quarter GDP rose to 1.4 percent from the earlier reading of 1.1 percent. By comparison, a reading of 2.5 to 3 percent is considered optimal. GDP measures the pace of economic activity and represents the total dollar value of all goods and services produced over a specific time period. It has averaged 2 percent since the recession ended in mid-2009 and reached 2.6 percent in the second quarter of 2015.

The inflation gauge, Core Personal Consumption Expenditures (PCE), rose 1.7 percent from August 2015 through August 2016, below the 2 percent target. Core PCE measures the change in prices of goods and services purchased by consumers throughout the economy, excluding volatile food and energy. Upticks in inflation can reduce the value of fixed investments like Mortgage Backed Securities, and hurt the home loan rates that are tied to them. While inflation is still below the Fed's target range, it will be important to watch for any future increases.

However, consumers are feeling optimistic, according to the Conference Board. Its Consumer Confidence Index soared to 104.1 in September, the highest level since before the recession began in 2008.

Investors and the Federal Reserve will be looking to see if job creation lifts or drags the 180,000 new jobs per month average in 2016. We'll know for sure Friday.

National manufacturing data from the ISM Index will be released on Monday followed by the ISM Services Index on Wednesday.

As you can see in the chart below, Mortgage Bonds remain near their best levels of the year. Home loan rates continue to hover close to historic lows.