The labor market has certainly had its share of reasons to cheer and groan this year. September's Jobs Report was no exception.

There were 156,000 new jobs created in September, the U.S. Bureau of Labor Statistics reported, below the 176,000 expected. Gains occurred in professional and business services and in health care. July numbers were revised down while August was revised up, leaving job gains for those two months 7,000 less than previously reported. Job growth in 2016 has now averaged 178,000 per month, compared with an average of 229,000 per month in 2015 and 251,000 per month in 2014. 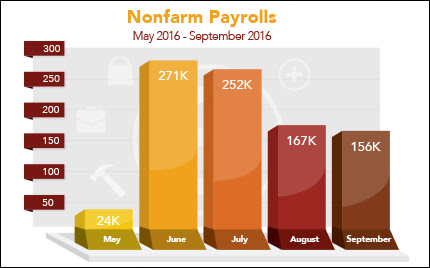 The unemployment rate ticked up to 5.0 percent from 4.9 percent, which is little changed since September 2015. And from September 2015 to September 2016, average hourly earnings rose 2.6 percent.

According to data analytics firm CoreLogic, August home prices, including distressed sales, rose 6.2 percent year-over-year with a 1.1 percent gain from July to August. CoreLogic's chief economist, Frank Nothaft, said, "Home prices are now just 6 percent below the nominal peak reached in April 2006. With prices forecasted to increase by 5 percent over the next year, prices will be back to their peak level in 2017."

After a back-to-school shopping season that didn't make the grade in August, many hope Retail Sales rebounded in September. Markets will be closed on Monday for Columbus Day.

On Friday, Retail Sales, the Producer Price Index and the Consumer Sentiment Index will be released.

As you can see in the chart below, Mortgage Bonds declined in recent weeks. However, home loan rates continue to hover in historic territory.