After declining in August, Retail Sales surged by 0.6 percent in September, which signals the consumer is alive and well as we head into the crucial holiday shopping season. The increase was led by ramped-up sales for autos and increasing fuel costs at gas stations. The positive September news follows a 0.2 percent loss in August and a slight gain of 0.1 percent in July. 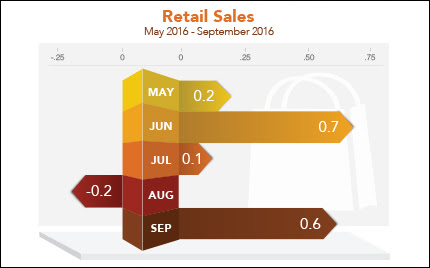 Meanwhile, the release of September's Federal Open Market Committee meeting minutes revealed a stronger resolve to raise the benchmark Fed Funds Rate soon. This is the rate at which banks lend money to one another overnight. With weak Gross Domestic Product and muted inflation heading into September's meeting, incoming economic data will be a crucial determining factor on the timing of future action by the Fed.

Speaking of inflation, wholesale inflation came in hotter than expected due to higher energy and food costs, as the September Producer Price Index (PPI) rose 0.3 percent. Core PPI, which strips out volatile food and energy prices, also rose 0.2 percent, above the 0.1 percent expected. Inflation reduces the value of fixed investments like Bonds. On an annual basis, PPI has risen just 0.7 percent, which shouldn't put much pressure on the more closely watched Consumer Price Index (CPI). However, it will be important to watch how inflation trends in upcoming reports. When inflation rises, it can impact home loan rates, since it is tied to Mortgage Bonds.

For now, home loan rates are still something to be happy about, remaining near all-time lows for those considering a home purchase or refinance.

If you or someone you know has any questions please don't hesitate to contact me. I'm happy to help.

After weaker-than-expected housing data in the past month, the sector will be watched for signs of a pickup. Consumer inflation will be too.

Manufacturing data from the Empire State Index and the Philadelphia Fed Index will be reported on Monday and Thursday, respectively.

In the housing sector, look for the NAHB Housing Market Index on Tuesday, Housing Starts and Building Permits on Wednesday, and Existing Home Sales on Thursday.

The Consumer Price Index will be reported on Tuesday.

The Fed's Beige Book will be released on Wednesday.

As usual, weekly Initial Jobless Claims will be reported on Thursday, as initial claims have been at 43-year lows.

As you can see in the chart below, although Mortgage Bonds declined in recent weeks they managed to stabilize, keeping home loan rates in historically low territory.