After trudging along during the first and second quarters of 2016, Gross Domestic Product (GDP) got a little more spring in its step.

The government reported that the first reading on third quarter GDP rose by 2.9 percent, above the 2.5 percent expected and well above the anemic 1.4 and 0.8 percent reported in the second and first quarters respectively. GDP measures the pace of economic activity and represents the total dollar value of all goods and services produced over a specific time period. A reading of 2.5 to 3 percent is considered optimal. This initial third quarter reading marks the fastest pace of growth in two years. 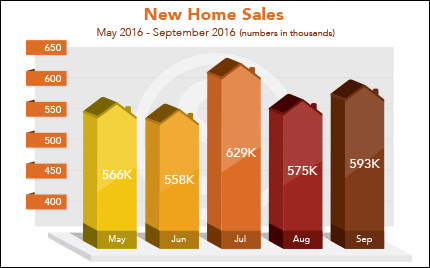 Yet, all was not rosy within the report. Consumer spending grew by just 2.1 percent, well below the 4.3 percent in the second quarter. Corporate investment on equipment fell for the fourth straight quarter, the longest stretch since the end of the Great Recession in mid-2009. Residential investment also declined. GDP's inflation gauge was near unchanged.

In housing news, September New Home Sales rose 3.1 percent from August to an annual rate of 593,000 units, the Commerce Department reported. However, this was below the 610,000 expected and after August was revised lower to 575,000 units from the 609,000 originally reported. The good news is New Home Sales are up nearly 30 percent from September 2015. The median price for a new home also rose 6.7 percent in the past year due in part to lower inventory numbers. Currently, there is a 4.8-month supply of new homes, below the August inventory level.

Also of note, the August S&P/Case-Shiller Home Price Index rose 5.1 percent annually, which was in line with estimates and comes after a 5.0 percent increase in July. From July to August, prices were up 0.2 percent.

If you or someone you know has any questions , please don't hesitate to contact me. I'm happy to help.

This action-packed week will revolve around two market-moving releases: the Fed's monetary policy statement and the Jobs Report for October.

Manufacturing data will come with Monday's Chicago PMI and the national ISM Index on Tuesday.

Look for the first labor market news of the week via the ADP National Employment Report on Wednesday, followed by weekly Initial Jobless Claims Thursday.

While not an economic report, the Fed's monetary policy statement will be released Wednesday after the close of the Federal Open Market Committee (FOMC) meeting.

Productivity and the ISM Services Index will be delivered on Thursday.

The monthly Jobs Report for October will be released on Friday, which includes Non-farm Payrolls, Hourly Earnings, Average Work Week and the Unemployment Rate.

As you can see in the chart below, Mortgage Bonds have been up and down recently, however home loan rates remain near historic lows.