As Americans went to the polls to exercise their right to vote for president, global markets took notice.

When Donald Trump was declared president elect, the market reactions overnight were as wild and unpredictable as the election itself. Dow futures were down more than 800 points in the wee hours of the morning, only to close up 250 points Wednesday. Further, the Dow Jones Industrial Average opened Thursday at a new all-time high. 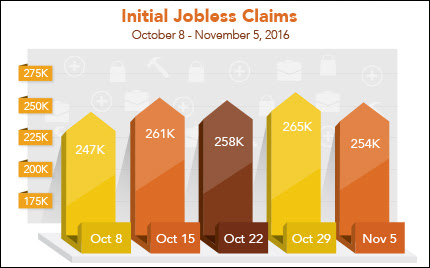 Investors may feel the win is more Stock-market friendly with potential tax cuts, deregulation of banks, and higher defense and infrastructure spending. There is also speculation that President-elect Trump's anticipated policies could spur a rise in inflation.

Rallies in the Stock markets and inflationary increases both can have a negative effect on Mortgage Backed Securities, the type of Bond to which home loan rates are tied.

In other news, weekly Initial Jobless Claims continue to signal a robust job market. The Labor Department reported that the number of Americans filing for first-time unemployment benefits fell 11,000 to 254,000 during the week ending November 5, below the 262,000 expected. First-time claims have now remained below the 300,000 mark for 88 consecutive weeks, a stretch not seen since 1970.

If you or someone you know has any questions please don't hesitate to contact me.

Inflation, housing and manufacturing reports will stand out in this data-rich week as the Fed gears up for its Federal Open Market Committee meeting in December.

The Retail Sales report kicks off the week on Tuesday.

Regional manufacturing data comes from the Empire State Index and the Philadelphia Fed Index on Tuesday and Thursday, respectively.

As usual, weekly Initial Jobless Claims will be delivered on Thursday.

As you can see in the chart below, Mortgage Bonds took a dive recently following the presidential election. Bond markets were closed Friday, November 11 in observance of Veterans Day.