"My mama told me, 'You better shop around.'" The Miracles. Clearly that message wasn't heard among consumers. Back-to-school shopping didn't help overall Retail Sales make the grade in August. The increasing cost of goods might be to blame. 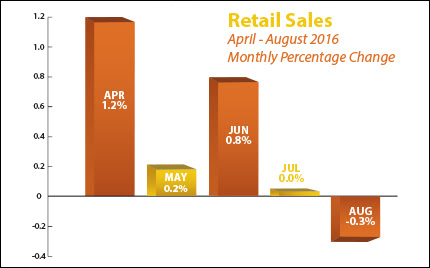 Consumers spent less on a variety of goods, including autos, in August. This could signal a slowdown here in the U.S., especially since August is a big month for back-to-school sales and consumer spending is what drives our economy. The Commerce Department reported that Retail Sales in August fell 0.3 percent, below the -0.1 percent expected.

Retail Sales have now slowed for two straight months. This likely means that the Federal Reserve will not raise the short-term Fed Funds Rate at the next Federal Open Market Committee meeting Sept. 20-21. The Fed Funds Rate is the rate at which banks lend money to each other overnight.

This exercise in frugality might be a reaction to increasing costs on the consumer side. While the Producer Price Index showed that wholesale inflation remained tame, the Consumer Price Index (CPI) increased 0.2 percent in August, the U.S. Bureau of Labor Statistics reported.

If you have any questions about home loans or rates, please contact me today.

Housing data dominates, but the Federal Open Market Committee (FOMC) will garner much of the attention.

Housing data kicks off with the NAHB Housing Market Index on Monday, Housing Starts and Building Permits on Tuesday, and Existing Home Sales on Thursday.

The FOMC monetary policy statement will be issued Wednesday.

Weekly Initial Jobless Claims will be released on Thursday.

As you can see in the chart below, Mortgage Bonds have tried to make up for some lost ground recently; however, home loan rates remain in historically low territory.