There were drops in key construction data and sales of existing homes, but builder confidence is high. Fewer people began excavation on new homes in August. The Commerce Department repor Website ted Housing Starts fell 5.8 percent from July to an annual rate of 1.142 million units, below the 1.186 million expected. The South saw a decline of 15 percent, offsetting gains in the Northeast, Midwest and West. Starts on single-family homes fell 6 percent, while multifamily dwellings decreased by 5.4 percent.

Building Permits also were below expectations. This sign of future construction fell 0.4 percent from July.

Existing Home Sales also dropped in August, falling 0.9 percent from July to an annual rate of 5.33 million units, below the 5.50 million expected. The National Association of REALTORS® said higher prices and low inventories kept buyers on the sidelines. On a positive note, sales were up 0.8 percent from August 2015.

Another good sign: Builder confidence in September jumped to its highest level since October 2015 as reported in the National Association of Home Builders Housing Market Index. The Housing Market Index gauges builder perceptions of current single-family home sales and sales expectations for the next six months. The survey also asks builders to rate traffic of prospective buyers. All three components moved higher in September.

Meanwhile, members of the Federal Open Market Committee (FOMC) met to weigh data on jobs, price stability and economic growth as a whole. The FOMC left its benchmark Fed Funds Rate unchanged. This short-term rate is the rate at which banks lend money to one another overnight. Fed Chair Janet Yellen noted the decision "does not reflect a lack of confidence in the economy" but instead a "cautious approach" to strengthening the economy.

The great news for homebuyers and those looking to refinance is that home loan rates continue to hover in historically low territory. 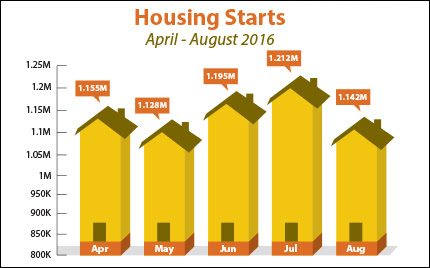