In housing news, Housing Starts slipped in January but still beat expectations. The Commerce Department reported Housing Starts declined 2.6 percent in January from December to an annual rate of 1.246 million. However, Housing Starts were up 10.5 percent from January 2016. In addition, Building Permits were 4.5 percent above December's figures. New housing inventory that is in the works or being planned will be a welcome sign to homebuyers. 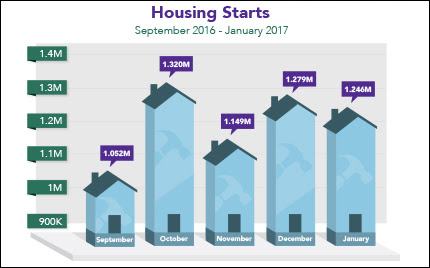 Retailers enjoyed a solid January as consumers seemed more upbeat about the economy. Retail Sales rose 0.4 percent, above the 0.2 percent expected, while the December reading was revised higher, per the Commerce Department. From January 2016 to January 2017, Retail Sales were up 5.6 percent.

Rising inflation decreases the value of Bonds, like Mortgage Backed Securities. This, in turn, can have a negative impact on home loan rates, which are tied to Mortgage Bonds. While Mortgage Bonds reacted negatively to the hot inflation and robust economic data, it was the words of Federal Reserve Chair Janet Yellen that really set markets in motion. Yellen caused a stir early in the week when she said it would be "unwise to wait too long to hike interest rates," referring to the Fed Funds Rate. This is the rate at which banks lend money to each other overnight. Her remarks revved a record-setting Stock rally at the expense of Bonds, though Mortgage Bonds rebounded later in the week.

Housing news will be the bookends of a short week. Markets are closed Monday in observance of Presidents Day.

In housing news, Existing Home Sales will be released on Wednesday followed by New Home Sales on Friday.

The Consumer Sentiment Index will be shared on Friday.

As you can see in the chart below, Mortgage Bonds have rebounded in recent days. Despite recent volatility, home loan rates are still in attractive territory.