Its official. Mount Rose Ski Area has the most Snow in North America with almost 700 inches. The February Jobs Report had a lot to celebrate, including job and wage growth.

U.S. employers added 235,000 new jobs in February, above the 188,000 expected, the U.S. Bureau of Labor Statistics reported. Gains in construction and manufacturing, in particular, led the surge. While December's numbers were revised down and January's were revised up, combined revisions totaled 9,000 more jobs than previously reported. 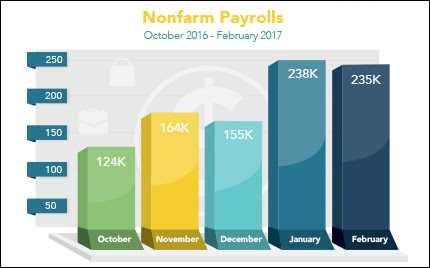 The unemployment rate was 4.7 percent, down from 4.8 percent, and the Labor Force Participation Rate was at its highest in a year at 63 percent. Average hourly earnings rose by 2.8 percent from February 2016 to February 2017.

Overall, this was a robust report and likely means the Fed will raise its benchmark Fed Funds Rate at its meeting on March 14-15. This is the rate at which banks lend money to each other overnight.

In housing news, home price gains continued in January. CoreLogic, a leading provider of consumer, financial and property information, reported that January home prices, including distressed sales, rose 6.9 percent from January 2016 to January 2017. The gains were due in part to lean inventories of homes for sale on the market. From December 2016 to January 2017, prices rose 0.7 percent. CoreLogic's chief economist, Frank Nothaft, said, "Many markets have seen housing prices outpace inflation."

For those in the market for a new home, home loan rates remain attractive despite recent market volatility.

While the week is jam-packed with key economic reports, the March 14-15 Federal Open Market Committee meeting and release of the monetary policy statement will likely be the headline grabber.

Inflation data from Tuesday's Producer Price Index and Wednesday's Consumer Price Index will be dissected by Fed members at this week's FOMC meeting.

Retail Sales will be released on Wednesday along with the Fed's monetary policy statement.

On Thursday, Housing Starts and Building Permits will be released along with the usual weekly Initial Jobless Claims.

The Consumer Sentiment Index will be reported on Friday.

As you can see in the chart below, Mortgage Bonds struggled to gain traction recently. Home loan rates remain attractive despite Bond market losses.