Spring has sprung! It has been beautiful the past 10 days here in Incline Village, with temperatures in the 50's at lake level. A Winter storm is fast approaching with 2-4 feet of snow forecast for the higher elevations by Sunday. 2016-2017 may be the winter that never ends. Lake Tahoe is fast approaching its legal limit of 6229 feet. As of today it is at 6227.26 feet MSL .

Real Estate and Mortgage Rates - Last Week in Review and Forecast for this Week; 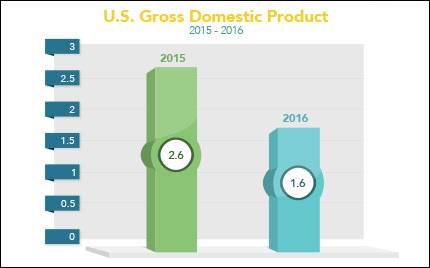 While 2016 Gross Domestic Product was anemic, consumers showed some strong spending in the fourth quarter.

There were some bright spots with the latest numbers. Consumer spending, which makes up two-thirds of economic activity, rose 3.5 percent from the previous reading of 3 percent. Corporate profits also were up 9.3 percent year over year, the most in four years due in part to a recovery in the energy sector.

In economic news, Consumer Confidence was also a bright spot, as it surged well above expectations. However, tight housing inventory remains a reality across much of the country, and is a key factor in rising home prices. The January S&P/Case-Shiller 20-city Home Price Index showed home prices rose 5.7 percent year over year, just above the 5.6 percent expected.

Inflation had a slight uptick in February from January but remained just below the Fed's target range of 2 percent. Core Personal Consumption Expenditures, which strips out volatile food and energy prices, rose 1.8 percent year over year in February, consistent with January's reading. The Fed would like Core PCE to reach, exceed and stay above 2 percent -- something it has not done in nine years -- before hiking the benchmark Fed Funds Rate more aggressively. If Core PCE stalls at current levels, it will be tough for the Fed to justify additional hikes, as these hikes are designed to stave off inflation.

The good news is that Mortgage Bond prices have gained some ground recently, and home loan rates remain historically attractive for those in the market to buy a home.

March may log another solid month of job growth to wrap up the first quarter of 2017.

National manufacturing numbers in the ISM Index will be released on Monday followed by the ISM Services Index on Wednesday.

Also on Wednesday, FOMC minutes from the March Federal Open Market Committee meeting will be released.

As you can see in the chart below, Mortgage Bonds have gained some ground after falling during the early part of March. While Bond prices have currently stalled, home loan rates remain attractive.