Headline news made investors (and politicians) jumpy this week, and the average American received a mixed bag of money matters.

Job growth, as reported by the Department of Labor, came in at 98,000 in March, following gains of 216,000 in January and 219,000 in February. Both January and February job numbers were revised downward by a total of 38,000 from initial reports, and the March number was nearly half of what was expected. On a positive note, the Unemployment Rate dropped from 4.7 percent to 4.5 percent from February to March, the lowest in 10 years. Plus, average hourly earnings rose 2.7 percent over the last year, though wage growth slipped from February to March. 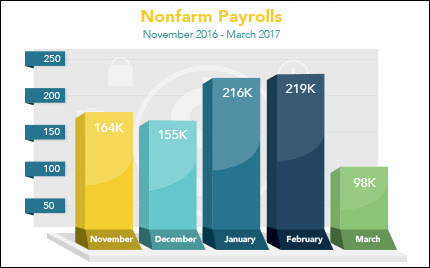 Jobs data spurred some market volatility, but markets were further agitated by continued unrest in North Korea and Syria as well as March Federal Open Market Committee meeting minutes that revealed the Fed may begin to shrink its balance sheet by the end of 2017 and that some members are worried Stock evaluations are too high.

Inflation numbers are the ones to watch this week as the Fed continues to weigh its 2017 monetary policy options. The Bond markets close at 2 p.m. ET on Thursday and both Stock and Bond markets are closed Friday in observance of Good Friday.

Also being released on Thursday will be weekly Initial Jobless Claims and the Consumer Sentiment Index.

Retail Sales are scheduled for Friday.

As you can see in the chart below, Mortgage Bonds improved to levels seen in January, keeping home loan rates near historic lows.