After two sluggish months of sales, consumers opened their pocketbooks in April.

Consumers ramped up their spending at auto dealers, hardware stores and e-commerce outlets. April Retail Sales rose 0.4 percent from the 0.1 percent in March, which was revised up from -0.3 percent. Increased consumer spending could boost economic growth in the second quarter, as it makes up two-thirds of the nation's economic activity. 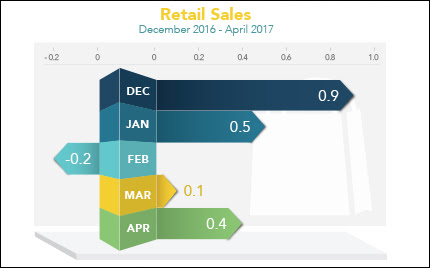 There was important news on inflation, as the Consumer Price Index (CPI) was up 0.2 percent in April, in line with estimates. The year-over-year number declined to 2.2 percent from 2.4 percent in March, which was Bond-friendly news. When stripping out volatile food and energy numbers, the Core CPI saw a 0.1 percent gain in April, just below expectations. Year-over-year Core CPI also slipped to 1.9 percent from the +2 percent that has been the norm over the past 12 months, which was more good news for Bonds.

Inflation is an important measure to watch because inflationary pressures can reduce the value of fixed investments, like Mortgage Bonds, and the home loan rates tied to them.

At this time, home loan rates remain attractive and near historic lows.

If you or someone you know is in the market for a new home or a home refinance, please contact me. I'd be happy to answer any questions about home loan rates and products.

Manufacturing and housing data are sprinkled throughout what may be a less volatile week in the markets.

Regional manufacturing data comes via the Empire State Index on Monday and the Philadelphia Fed Index on Thursday.

Housing Starts and Building Permits will be delivered on Tuesday.

As usual, weekly Initial Jobless Claims also will be reported on Thursday.

As you can see in the chart below, Mortgage Bonds reacted to bond-friendly inflation news, regaining some lost ground. Home loan rates remain attractive and near historic lows.