Families may have pulled back on back-to-school shopping, but Hurricane Harvey played a role too. The Commerce Department reported that consumers pulled back on spending in August due in part to a drop in car sales attributed to Hurricane Harvey in southern Texas. Retail Sales fell 0.2 percent versus the 0.1 percent increase expected, while July's sales figures were revised lower to 0.3 percent from 0.6 percent. Retailers have been suffering a bit with in-store traffic, but sales at online retailers declined 1.1 percent in August too, the biggest drop since April 2014. 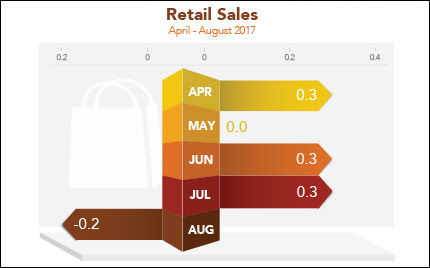 On the inflation front, the Consumer Price Index (CPI) had its largest month-over-month increase in seven months, rising 0.4 percent from July to August. But one month does not make a trend; the increase was due in part to a spike in gasoline prices that posted the biggest jump since January. Core CPI, which excludes volatile energy and food prices, was in line with expectations at 0.2 percent. The Producer Price Index (PPI), which measures wholesale inflation, came in just below expectations in August. But on an annual basis, PPI rose 2.4 percent after increasing 1.9 percent in July.

Any signs of ongoing inflationary pressure are bad for fixed investments, like Mortgage Bonds, so inflation is an important metric to watch. When Mortgage Bond prices worsen, the home loan rates tied to them can worsen as well.

At this time, home loan rates remain near historic lows.

If you or someone you know has questions about home financing or home loan rates, please contact me. I'd be happy to help.

Housing Starts and Building Permits will be released on Tuesday, followed by Existing Home Sales on Wednesday.

The Fed's monetary policy statement also will be released Wednesday, and it could be a market mover.

As you can see in the chart below, Bonds have been trading in a sideways pattern after recent declines. Home loan rates are still near historic lows.