High prices and low inventories curtailed Existing Home Sales in August. The National Association of REALTORS® (NAR) reported that Existing Home Sales fell 1.7 percent from July to an annual rate of 5.35 million units versus the 5.42 million expected. NAR said that gains in the Northeast and Midwest were outpaced by declines in the South and West. From August 2016 to August 2017, sales were up just 0.2 percent. 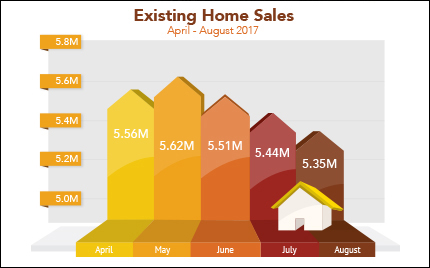 The median existing home price in August was also up 5.6 percent from August 2016, marking the 66th straight month of year-over-year gains.

New construction may still encourage buyers yet this fall, but the numbers weren't favorable in August. The Commerce Department reported that Housing Starts fell for the second straight month, slipping 0.8 percent from July to an annual rate of 1.18 million units. On a positive note, year-over-year Housing Starts rose 1.4 percent. Single-family starts, which make up the biggest share of the housing market, rose 1.6 percent. Multi-family dwellings fell 5.8 percent from July and are down 23 percent from August 2016. Building Permits, a sign of future construction, rose 5.7 percent from July, hitting their highest level since January.

Finally, Mortgage Bonds fell modestly after the Federal Reserve announced it will begin to unwind its massive $4.5 trillion balance sheet starting on the ninth business day of October and continuing every ninth business day of the month thereafter. The balance sheet is made up of Mortgage Backed Securities and Treasury Bonds. The plan is designed to have little disruption to the market. Seeing that this has never been done before, it remains to be seen what happens to Mortgage Bond prices and the home loan rates tied to them over time.

Will the mystery of low inflation creep up on the Federal Reserve? No spoiler here. Stay tuned for Friday's release of the Fed's favorite inflation gauge.

Consumer Confidence also will be released on Tuesday, followed by the Consumer Sentiment Index on Friday.

Durable Goods Orders will be released on Wednesday.

On Thursday, the third reading on second quarter Gross Domestic Product will be shared along with weekly Initial Jobless Claims.

On Friday, the Fed's favorite inflation gauge, Core Personal Consumption Expenditures, will be delivered along with Personal Income, Personal Spending and regional manufacturing data via the Chicago PMI.

As you can see in the chart below, Mortgage Bond prices dropped recently. Home loan rates are still in attractive territory.