Consumers weren't afraid to spend in September after holding back in August.

Folks were spending in September, according to the most recent Retail Sales report issued by the Commerce Department. This was welcome news, as consumer spending makes up about two-thirds of the U.S. economy. Sales were up 1.6 percent from August, just below expectations, and up 4.4 percent from September 2016. Increases in gas, auto and building material sales led the way due to hurricane-related boosts. When stripping out autos, sales rose a solid 1 percent in September from August. 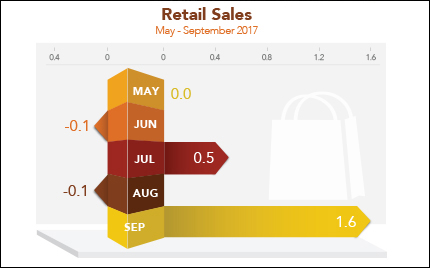 The Bureau of Labor Statistics reported that consumer inflation via the Consumer Price Index (CPI) jumped 0.5 percent in September from August, though this was softer than expected. However, the more closely watched Core CPI, which excludes volatile food and energy, was up just a meager 0.1 percent in September. This left year-over-year Core CPI at 1.7 percent for the fifth month in a row, meaning it still remains below the Fed's inflation target of 2.0 percent.

Wholesale inflation also ticked up in September as energy prices rose following Hurricane Harvey. The Producer Price Index (PPI) rose 0.4 percent from August, in line with estimates, while annual PPI jumped 2.6 percent, the biggest gain since February 2012. Core PPI, which strips out volatile food and energy, rose 0.2 percent as expected from August to September, while the annual Core PPI was up 2.1 percent.

The Federal Open Market Committee meeting minutes from August revealed the Fed said the economy is strong enough to withstand an increase to the Fed Funds Rate later this year. This is the rate banks lend to one another overnight. However, the Fed will be closely watching inflation readings and other key economic reports in the coming weeks and months, and it remains to be seen if any data will impact this decision.

Regional manufacturing data from the Empire State Index will be released on Monday, followed by the Philadelphia Fed Index on Thursday.

Look for housing numbers on Wednesday with the release of Building Permits and Housing Starts.

The Fed's Beige Book will also be delivered on Wednesday.

Existing Home Sales close out the week on Friday.

As you can see in the chart below, Mortgage Bond prices got a boost in the second half of the week. Home loan rates remain near historic lows.