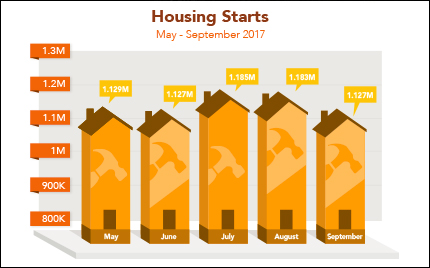 Building Permits, a sign of future construction, fell 4.5 percent from August to an annual rate of 1.215 million units, just below the 1.225 million expected.

After three straight monthly declines, Existing Home Sales eked out a 0.7 percent gain in September to an annual rate of 5.39 million units, above the 5.29 million expected. September's sales pace is 1.5 percent below a year ago and is the second slowest over the past year (behind August). Ongoing supply shortages and the hurricanes muted overall activity and caused sales to fall back on an annual basis, according to the National Association of REALTORS®.

On a positive note, the October National Association of Home Builders Housing Market Index rose four points to 68, as homebuilders rebounded from the initial shock of Hurricanes Harvey and Irma. The Index measures sentiment among builders and any reading over 50 is considered a positive sign.

Find out if the economy is still flexing its muscles with the first reading of third quarter GDP. Economic data kicks off on Wednesday with the release of Durable Goods Orders.

Also on Thursday, weekly Initial Jobless Claims will be reported.

Gross Domestic Product (GDP) will be delivered on Friday in addition to the Consumer Sentiment Index.

As you can see in the chart below, Mortgage Bond prices slipped recently. Home loan rates remain near historic lows.