The Commerce Department reported that New Home Sales surged 18.9 percent in September from August to their highest level since October 2007. This was the largest monthly gain since January 1992! Sales came in at 667,000 units versus the 555,000 units expected, and they were up 17 percent when compared to September 2016. Currently, there is a five-month inventory of new homes for sale on the market, down from six months in August. A six-month supply is seen as a healthy balance between supply and demand. 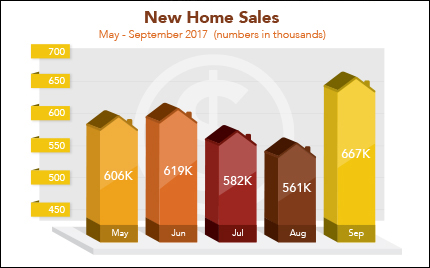 Gross Domestic Product (GDP) grew by a solid 3.0 percent in the third quarter of 2017, according to the first of three readings released by the Bureau of Economic Analysis. This follows the strong showing in second quarter, when economic activity increased 3.1 percent. Consumer spending, which makes up nearly two-thirds of economic activity, increased 2.4 percent after increasing 3.3 percent the previous quarter. GDP is the best way to measure a country's overall economic health and includes the total value of finished goods and services produced within a country's borders in a specific timeframe.

After September job growth was stifled by hurricanes, the October Jobs Report is poised for a rebound.

Look for manufacturing news with Chicago PMI on Tuesday and the ISM Index on Wednesday.

Also on Wednesday, the ADP National Employment Report and the Fed's Monetary Policy Statement will be released.

The big headliner on Friday is the Jobs Report for October, which includes Non-farm Payrolls, Unemployment Rate, Average Work Week and Hourly Earnings. The ISM Services Index also will be released.

As you can see in the chart below, Mortgage Bond prices slipped recently. Home loan rates remain in attractive territory.