The Commerce Department reported that Retail Sales rose 0.6 percent in December from November. The increase was due in part to strong sales for autos. The year ended with momentum that could signal sales growth in 2017. From December 2015, sales were up 4.1 percent year over year. Overall, sales were up 3.3 percent for 2016 after a 2.3 percent gain in 2015. 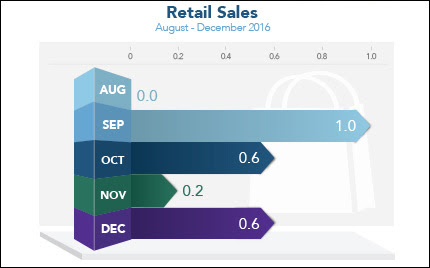 Meanwhile, wholesale inflation ticked up in December, increasing 0.3 percent from November, as reported in the Producer Price Index (PPI) from the U.S. Bureau of Labor Statistics. From December 2015 to December 2016, PPI climbed 1.6 percent, which was the largest 12-month gain since 2014. Core PPI, which strips out volatile food and energy prices, also increased 0.2 percent from November to December.

Inflation, at both the wholesale and consumer levels, is an important measure to track because increasing inflation reduces the value of fixed investments like Mortgage Bonds. When Bond prices worsen, the home loan rates tied to them can worsen as well.

The Consumer Price Index is a key report to watch in a week that kicks off Tuesday with a full slate of manufacturing, housing and other data. Markets are closed Monday, January 16 in recognition of Martin Luther King Jr. Day.

Regional manufacturing data will be released in the Empire State Index on Tuesday followed by the Philadelphia Fed Index on Thursday.

Look for housing data via the NAHB Housing Market Index on Wednesday and Housing Starts and Building Permits on Thursday.

As you can see in the chart below, Mortgage Bonds recently lost some of the footing gained heading into 2017.