Housing Starts scored a disappointingly small gain in July, but they're very volatile month to month. So, comparing the year-to-date pace with the same period in 2017 finds starts are up 5.9% from a year ago.

There's lots of yak about builders being down about labor shortages and materials costs. But Building Permits are increasing at a faster rate than Starts and strong buyer demand keeps builder confidence historically high.

Freddie Mac's chief economist observed that mortgage rates have been mostly flat since late spring, but "this pause in rates is not leading to increasing home sales." Buyers who can act probably should while rates are at rest.

CHOPPY... Equities took investors on a bumpy ride before finishing with the Dow and S&P 500 up, and the Nasdaq off a tad. Turkish financial turmoil was the drag, while strong corporate earnings and progress with U.S.-China trade talks sent stocks skyward.

We also got more evidence of increasing economic growth. Retail Sales jumped 0.5% in July and are up 6.4% from a year ago. The Philly Fed and NY Empire State indexes showed continued optimism among East Coast manufacturers. Total industrial production saw its largest annual gain in six years.

Initial jobless claims dropped to 212,000, only 4,000 more than the lowest read since 1969 when we had a smaller workforce. Finally, analysts said July's 0.6% gain in the Leading Economic Index points to sustained economic expansion for the foreseeable future.

Bonds ended the week on a flat note as prices dipped on positive trade news. The 30YR FNMA 4.0% bond ended up just .02, to $101.83. For all the hand wringing over rising rates, the national average 30-year fixed mortgage rate dropped again in Freddie Mac's latest Primary Mortgage Market Survey. Remember, mortgage rates can be extremely volatile, so check with your mortgage professional for up-to-the-minute information.

DID YOU KNOW?... First American's chief economist calculates that if mortgage rates doubled from current levels, home sales nationally would drop by a mere 5% (300,000 units).

LOOKING AT JULY HOME SALES, LISTENING TO THE FED... We'll get the complete picture of July's real estate transactions, with Wednesday's Existing Home Sales expected to be up a tick and Thursday's New Home Sales up a bit more than that. We'll also eavesdrop on the Fed's August meet, with the release of FOMC Minutes. Will we get clues about forthcoming rate moves?

Forecasting Federal Reserve policy changes in coming months...Opinions are firming up that we'll see a quarter percent rate hike next month, none in November, then another one ending the year. Note: In the lower chart, a 96% probability of change is only a 4% probability the rate will stay the same. 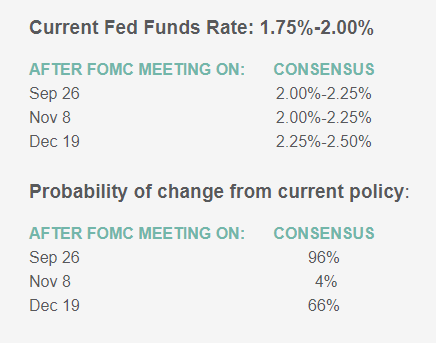