After a slow June and July, Housing Starts shot up 9.2% in August, to a 1.282 million annual rate. And single-family starts are up 5.7% for the first eight months of 2018 compared to the same period last year.

Existing Home Sales held steady in August, but that's a positive after four months of declines. Supply is finally turning around, as inventory rose year-over-year for the first time in 38 months!

Freddie Mac's chief economist observed, "Amidst this four-week climb in interest rates, the welcoming news is that purchase applications have risen on an annual basis for five consecutive weeks." Demand stays strong.

BACK TO BREAKING RECORDS... Though the tech-y Nasdaq lagged, the Dow and the S&P 500 hit new heights, driven by improving economic data indicating strong economic growth.

"Trade tensions" sound scary in the media, but tariffs have been mild and investors see they've had little effect on the economy. One economist calculated tariffs may add 0.1% overall to wholesale prices.

In bonds, longer-dated notes posted losses for the fourth week in a row. The 30YR FNMA 4.0% bond ended down .27, at $100.84. Consequently, the national average 30-year fixed mortgage rate drifted up for the fourth straight week. Remember, mortgage rates can be extremely volatile, so check with your mortgage professional for up-to-the-minute information.

DID YOU KNOW?... Despite increasing rates, mortgage applications rose last week, with the unadjusted Purchase Index up 9% from the week before, according to the Mortgage Bankers Association.

NEW HOME SALES, GDP UP, PENDING HOME SALES OFF, INFLATION MILD, THE FED HIKES... August New Home Sales are forecast up, but the Pending Home Sales index for existing homes should slide. The GDP-Third Estimate is predicted to have the economy booming at 4.3% growth, while Core PCE Pricesshow inflation is still benign. The FOMC Rate Decision is 100% expected to be a hike, so the focus will be on the Fed's rate forecast, particularly for 2019.

Forecasting Federal Reserve policy changes in coming months... Literally everyone sees a quarter percent rate hike on Wednesday. Then no move is forecast for November, but a final one to end the year. Note: In the lower chart, a 100% probability of change is a 0% probability the rate will stay the same. 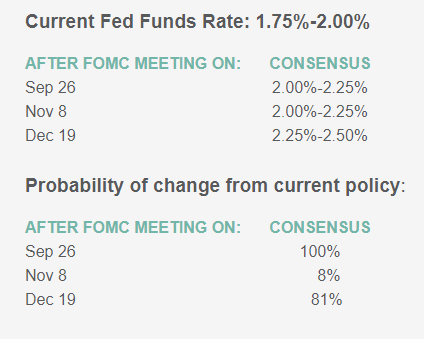