New Home Sales went up 3.5% in August, though most of the gain came from a downward revision to July. Yet the trend is higher: sales the first eight months of this year are up 6.8% from the same period in 2017.

HOT QUARTER, COOL WEEK... Stocks wrapped up Q3 posting their hottest quarterly gains since 2013, though the Dow and the S&P 500 cooled for the week, while the Nasdaq stayed warm.

Dampening the festivities were trade worries, rising oil prices and Italy's projected deficit increasing to 2.4% of GDP. We also had the expected quarter percent hike from the Fed who say they'll proceed at a moderate pace.

Meanwhile, the economy booms: GDP growth at 4.2% in Q2 and on track for the best year since 2005; personal income up 4.7% the past year; and the National Federation of Independent Business optimism index at a 35-year high.

DID YOU KNOW?... The National Association of Realtors reports that in 2017 only 9% of buyers found their agents online, the same as in 2008. Despite their growing online activities, 91% of buyers still hire agents through personal referrals.

THE BEAT GOES ON: MANUFACTURING, SERVICES, JOBS ALL GAIN... Economists predict the ISM Manufacturing and ISM Services indexes will show strong expansion in September, though slightly less than the month prior. They also expect Hurricane Florence to temporarily trim growth in Nonfarm Payrolls, but still see more than 180,000 new jobs created.

Forecasting Federal Reserve policy changes in coming months... The futures market expects last week's rate hike to hold in November, with another small hike in December which will hold in January. Note: In the lower chart, a 1% probability of change is a 99% probability the rate will stay the same. 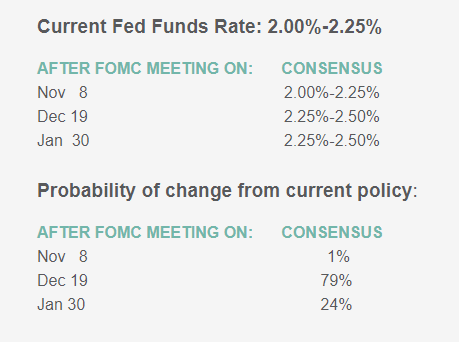