Realtor.com reports 465,000 new listings hit the market in September, up 8% from the year before, the largest annual gain in five years. The hot sales pace left inventory flat, but it's expected to increase soon.

Even the number of homes selling above list is falling. An online real estate database reports that in September, 22.9% of homes sold above asking, down from 29% in June.

ECONOMY UP, STOCKS DOWN... Rising stocks usually mean a rising economy (that's why we watch them), but last week's good economic data made traders worry the Fed may raise rates faster, which sent stocks down.

Good stuff included the read on the huge services sector of our economy that unexpectedly jumped to its highest level in more than 20 years, while the manufacturing index fell just a tad from August's 14-year high.

DID YOU KNOW?... Goldman Sachs economist Daan Struyven claims little chance of recession in the next three years. He said, "the model still classifies the expansion as mid-cycle."

INFLATION EDGES UP, BUT NOT MUCH... The key reads this week are on inflation. Both the wholesale Producer Price Index and the Consumer Price Indexare expected to drift up, but not much higher than the Fed's 2% annual target. That should keep the central bank (and Wall Street) calm about rates for now.

Forecasting Federal Reserve policy changes in coming months... The consensus feels the Fed will sit on the present rate in November, do another quarter percent hike in December, then hold in January. Note: In the lower chart, a 5% probability of change is a 95% probability the rate will stay the same. 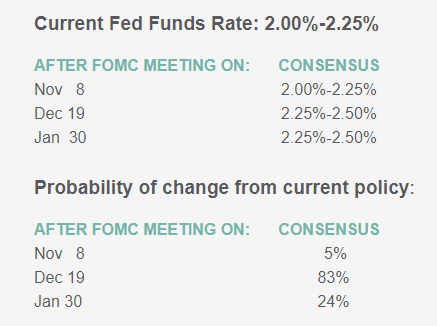