Fannie Mae's Home Purchase Sentiment Index (HPSI) slipped a tick overall in September, though the share of respondents who say now is a good time to buy rose by 5%.

The ADP and Moody's Analytics National Employment Report revealed 34,000 construction jobs were added to the economy in September. That should boost home building activity.

Recent data reveals home prices are easing some--17.4% of Trulia's listings in August had price cuts, up from 16.7% a year ago, and now at the highest level in four years.

But the Fed hikes rates to tame inflation, and last week, CPI inflation came in lower than expected. Anyway, as one analyst put it, "higher interest rates are warranted when the economy is strong."

Hey, S&P 500 companies should report Q3 earnings up almost 20% the past year, according to FactSet. Plus, preliminary University of Michigan Consumer Sentiment for October came in higher than the average read for 2018.

Bond prices in general went lower, although the 30YR FNMA 4.0% bond ended UP .16, to $100.13. In Freddie Mac's latest Primary Mortgage Market Survey, the national average 30-year fixed mortgage rate headed back up. Remember, mortgage rates can be extremely volatile, so check with your mortgage professional for up-to-the-minute information.

DID YOU KNOW?... The latest Zillow Group study on consumer housing trends reports down payments averaged 15 percent for first-time buyers.

EXISTING HOME SALES, HOUSING STARTS SLIP; PERMITS, RETAIL SOAR; WE CHECK ON THE FED... The forecast is for a slower pace of Existing Home Sales and Housing Starts in September, but Building Permits and Retail Salesshould climb, good signs going forward. And FOMC Minutes will tell us what the Fed said at the last meeting.

Forecasting Federal Reserve policy changes in coming months... Despite last week's talk about rising rates, the Fed futures market expects no changes until a quarter percent bump at the final FOMC meeting of the year. Note: In the lower chart, a 2% probability of change is a 98% probability the rate will stay the same. 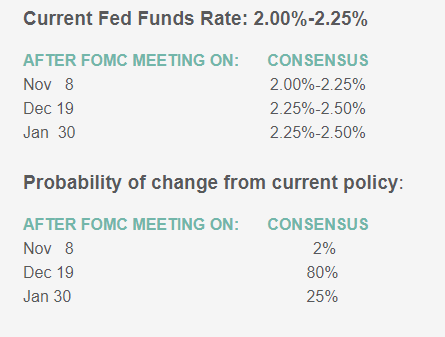