Hurricane Florence blew September Housing Starts down 13.7% in the South, though they were up 3.8% in the rest of the country. So, starts overall slipped 5.3%, to a 1.201 million annual rate.

The National Association of Home Builders chairman noted their confidence index rose on "solid housing demand fueled by a growing economy." In addition,"lumber prices have declined for three straight months."

September Existing Home Sales were down 3.4%, with Florence contributing to a 5.4% dip in the South. Lack of supply is the prob, but inventories are improving, now up two months in a row after 18 months flat or down.

MIXED... The Dow was up, the S&P 500 flat and the Nasdaq down, but this was better than the three prior weeks of declines. As corporate earnings season starts, investors are skittish over interest rates and some of the economic data.

DID YOU KNOW?... Attom Data Solutions reports homes remain more affordable than at the height of the housing boom in 2006, when buying a home required 52% of average wages, versus 37% today.

HOME SALES SLIP, GDP GROWS... September numbers for both New Home Sales and Pending Home Sales are forecast a tad down, thanks again to Hurricane Florence. Yet the GDP-Advanced read for Q3 should show economic growth still north of 3%, good for jobs, wages and real estate.

Forecasting Federal Reserve policy changes in coming months... The Fed futures market is still betting on no rate hike next month, then a quarter percent uptick in December, but no move in January. Note: In the lower chart, a 6% probability of change is a 94% probability the rate will stay the same. 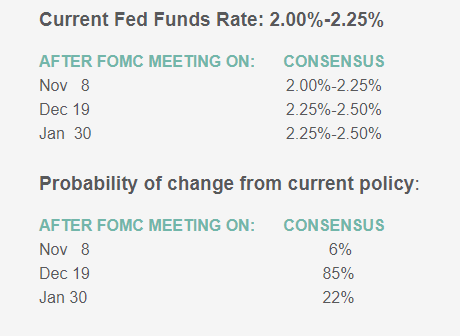