The Labor Department reported that U.S. employers hired 227,000 workers in January, above the 170,000 expected and signaling the sector kicked off 2017 on a high note. All was not rosy within the report, however. Average hourly earnings rose by a scant 0.1 percent versus the 0.3 percent expected. The December number was revised lower to 0.2 percent from the original 0.4 percent reported. In addition, job growth in November and December was revised lower by a total of 39,000. The Unemployment Rate ticked up to 4.8 percent from 4.7 percent. 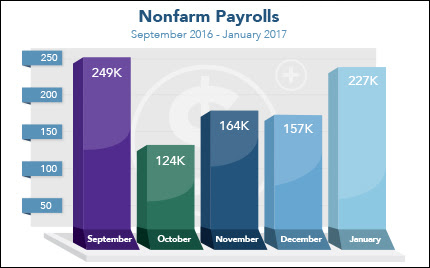 Weak wage growth could lead to tepid inflation if the pattern continues, and inflation ended 2016 on a tame note. Core Personal Consumption Expenditures (PCE), which strips out volatile food and energy, increased 0.1 percent versus the 0.2 percent in November. Year-over-year, Core PCE was up 1.7 percent.

And in housing news, the S&P/Case-Shiller 20-city Home Price Index rose by 5.3 percent from November 2015 to November 2016, up from October's annual increase of 5.1 percent.

Maximum employment, price stability and a strong housing sector are key measures considered by the Fed when setting the course of monetary policy. The Federal Open Market Committee (FOMC) kept its benchmark Fed Funds Rate unchanged when it met January 31 and February 1, despite indicating in December that three rate hikes were likely in 2017. At that time, the FOMC raised rates for only the second time in more than a decade.

The markets might take a breather in this week of light economic news.

As you can see in the chart below, Mortgage Bonds have stabilized in recent weeks. Home loan rates are still in attractive territory.