The latest numbers on Housing Starts and Building Permits may encourage dismayed homebuyers facing a lack of inventory.

October Housing Starts surged, the Commerce Department reported, up 25.5 percent from September. It was the highest level since September 2007. Single-family starts, which make up the largest share of the market, jumped nearly 11 percent, while multi-dwelling starts skyrocketed by 68 percent. From October 2015 to October 2016, Housing Starts were up 23.3 percent. October Building Permits also rose 0.3 percent. 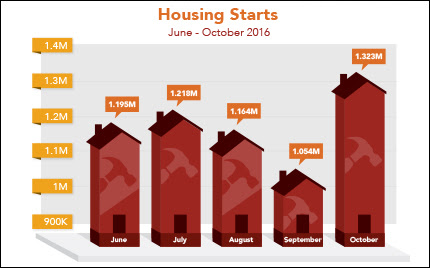 In more good news, Retail Sales were solid in October, which could spark a boost in the U.S. economy heading into the holiday shopping season. The Commerce Department reported Retail Sales rose 0.8 percent, above expectations, while September's numbers were revised higher. The positive numbers in September and October were the best two-month rise since early 2014. Retail Sales are up 4.3 percent from a year ago.

Wholesale inflation was unchanged and still tame in October, per the Producer Price Index report. The Consumer Price Index (CPI) edged higher but was in line with expectations in October at a 0.4 percent increase, though this was the largest gain in six months. Core CPI (which strips out volatile food and energy) was just below estimates. Year-over-year consumer inflation numbers edged lower.

Inflation will continue to be a data point to watch since increased inflation can hurt the value of fixed investments like Mortgage Bonds, and home loan rates to which Mortgage Bonds are tied.

Investors will have a lot to digest in this shortened Thanksgiving week.

As you can see in the chart below, Mortgage Bonds have attempted to stabilize following their post-election dive.